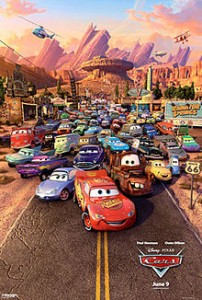 Pixar’s and Disney together released some wonderful movies for everyone to watch irrespective of their ages. ‘Cars’ was yet another blockbuster from their side featuring extravagant characters who are none other than anthropomorphic cars. The movie was another victory for the duo as it had mixed elements including the emotional rage, the vibrant acts, humor, love, sentiments and the fun filled and thrilling trip down the lane. The first rate sound recordings and casts along with the mysterious graphic design makes it a must watch and unique movie from other animated series that was released during the same season.

The rookie, Lightening McQueen plays the lead role in the movie voiced by Owen Wilson. The story starts off with the stardom this racing sensation receives with his truck Mack, on his road to success having the least time to find friends and spend time with them. On his way to the next race course, Lightening is help up by the Sheriff in Radiator Spring, a small tiny little town on the legendary Route 66.

The limelight is thrown onto this small part of Route 66 for the rest of the story where Lightening is asked to work on the road that he messed up after which he can be free. The life in Radiator Springs moves a little slow but in a very interesting way where he finds his love the pretty Porsche, Sally and his best friend the Tow Truck, Mater.
The rookie also finds the place pretty different and peaceful than his fast paced one and meets a couple of other friends including Doc Hudson, three times Piston Cup holder, Ramon, the body shop owner, Luigi and Guido, the Italian tire experts and Fillmore, the organic fuel connoisseur.

Throughout the storyline, the scenes are so addictive that none will ever blink an eye off. With the land of cars, the talking ones on the screen they are seen to be eating food, having jobs, driving themselves, hosting and anchoring TV shows, running gas stations, café and lot more. The entire tale brings alive those memories when people used to pack their bags with family and kids to tour around America through road spending time with friends in a peaceful place enjoying every single stop. The nostalgic appeal this movie brings about does not have any such silly scenes like those of the recently released one with plenty of animals and a lot of mess. Each and every single shot is taken with perfection that every character seems to be pretty lively on the screen.

Cars has everything like a complete package having those slight little humorous moments with tractor tipping and the little beetle cars flirting around with Lightening. The enthusiastic racing sequences are a must watch apart from the sensational and feet tapping soundtracks.

The movie ‘Cars’ seems to be just perfect from the very beginning till the end. It is not just the one for racing enthusiast but a movie without boredom for anyone of any age group.